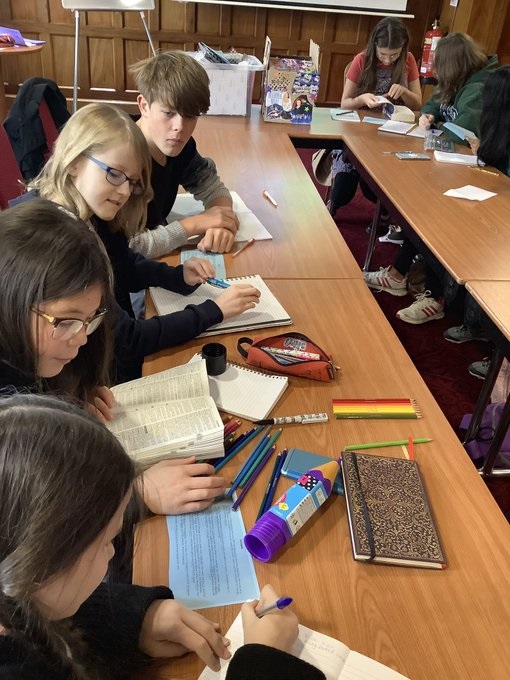 Have you ever wondered what would have happened if Cinderella was a wombat, or perhaps the Fairy godmother was a goldfish? Today the ‘Young Writers’ collectively re-envisaged the classic fairy tale of Cinderella- with an unforgettable, comical twist.

Following the recent English National Ballet's performance of Cinderella (an added bonus of being a 'Mayflower Young Writer'), our session circulated the theme of traditional Fairy tales and how they can be altered or “fractured” in many aspects. The writers understood the key themes and ideas that reoccurred in their childhood stories, but also appreciated that these can easily be shifted and changed to give an altogether different interpretation.

To illustrate this, the writers were split into groups of four and given a brief synopsis of the classic Cinderella story, a number and a dictionary. The synopsis was read, and all nouns within the text were underlined. The groups were then challenged to find one noun at a time in the dictionary, and using the specific number to their group, count the same number of consecutive nouns following the original word. For example, five nouns following “woman” brought the writers to “wombat”. This would encourage the swap of a new and innovative word, that would create an entirely different spin on the well-known fairy-tale.

This tested the 'Young Writers' to see how far their imagination could be stretched, and in turn proved just how easy it is to fracture a fairy-tale. The writers were of course eager to share their new-found storylines, and so performed them for the group (receiving a large amount of laughter and approval as a response).

To share just a few of the amazing adaptations that were created today:

During the second group, Lucy and Ryan imagined “A principle that sent out invitations to the balloon", whereas Cassie, Isobel and Gina told of a “Citation that married a worksheet and lived happily ever after"!

This exercise only briefly touched on the possibilities for the 'Young Writers' own fractured fairy-tales which were planned and discussed. Overhearing the enthusiasm and creativity that has stemmed from today, it is no trouble to suggest that the stories are eagerly awaited to be started on during next week’s session.