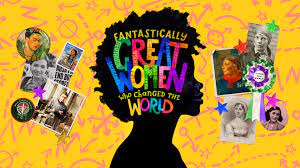 We saw some Fantastically Great Women with the Young Writers on Tuesday, the culmination of our term's theme.

Based on one of the most popular non-fiction books for young people at the moment, Fantastically Great Women Who Changed the World by Kate Pankhurt (loosely related to the Emmeline Pankhurst), the musical of the same name premiered at MAST this week.

It’s produced by the same people as SIX and has a similar structure in terms of small cast telling their history through song, verging on concert - though there’s more of a throughline story to Fantastically Great Women. The soundtrack, which I personally need everyone to petition for them to release, is phenomenal, full of catchy bops as well as one which almost had me in tears (and I never cry).

10-year-old Jade’s foray into the off-limits and yet to be completed gallery section, which comes to life à la Night At The Museum, allows us to explore female empowerment as we meet Amelia Earhart, Sacagawea, Gertrude Ederle, Emmeline Pankhurst, Jane Austen, Frida Kahlo, Agent Fifo, Mary Seattle, Mary Anning, Marie Curie, Rosa Parks and Anne Frank. The historical women are played by 5 actress multi-role-ing to such great affect you often forget it’s such a limited cast.

Shani says:
I really enjoyed the show! It as so interesting and the songs were really upbeat and fun, there was lots of comedy but it was also very informative as we followed the story meeting a wide range of important women in history who fought for their rights.

Ameila W says:
I think the show was amazing. I loved the aesthetics and visuals of the set as soon as I walked in. It captivated me and it set the bar very high for the actual show.

I was not disappointed - the band and music was so complex but catchy. I loved how they weren’t hidden away, they were part of the show, as they should be. The actor were breathtaking, and simply inspiring. The talent was breaking the bar before the first song even started! I was blown away with the idea of a smaller cast, yet more characters. I would watch it all over again if I could! 5 stars!

Fantastically Great Women is playing at MAST until 20th November when it then begins it’s tour. Check out Deeds Not Words over on YouTube for just a taste of what we were treated too.