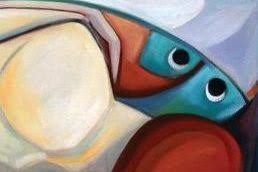 This week we looked at the effects of line breaks by examining ‘The Fish’ by Elizabeth Bishop, and ‘Ode to a Large Tuna in the Market’ by Pablo Neruda. I turned each poem into prose by removing the line breaks and each group member was given a copy. Looking at the poems individually and in turn - we had a listen to the poem being read, and took a few minutes to read it to ourselves before having a short chat about first impressions and especially noticeable moments. The exercise task was to go through the prose copy and break the work into poetic lines as if it were your own. When this stage was complete we went through the poem again line and alternate line by line. This generated good discussion around the various effects that line breaking can produce, and how we evaluate that effectiveness. The poet’s job became a group discussion weighing up priorities and wondering at the balancing act a good poem performs.

The Fish, by Elizabeth Bishop

Ode to a Large Tuna in the Market, by Pablo Neruda

I caught a tremendous fish and held him beside the boat half out of water, with my hook fast in a corner of his mouth. He didn't fight. He hadn't fought at all. He hung a grunting weight, battered and venerable and homely. Here and there his brown skin hung in strips like ancient wallpaper, and its pattern of darker brown was like wallpaper: shapes like full-blown roses stained and lost through age. He was speckled with barnacles, fine rosettes of lime, and infested with tiny white sea-lice, and underneath two or three rags of green weed hung down. While his gills were breathing in the terrible oxygen —the frightening gills, fresh and crisp with blood, that can cut so badly— I thought of the coarse white flesh packed in like feathers, the big bones and the little bones, the dramatic reds and blacks of his shiny entrails, and the pink swim-bladder like a big peony. I looked into his eyes which were far larger than mine but shallower, and yellowed, the irises backed and packed with tarnished tinfoil seen through the lenses of old scratched isinglass. They shifted a little, but not to return my stare. —It was more like the tipping of an object toward the light. I admired his sullen face, the mechanism of his jaw, and then I saw that from his lower lip —if you could call it a lip— grim, wet, and weaponlike, hung five old pieces of fish-line, or four and a wire leader with the swivel still attached, with all their five big hooks grown firmly in his mouth. A green line, frayed at the end where he broke it, two heavier lines, and a fine black thread still crimped from the strain and snap when it broke and he got away. Like medals with their ribbons frayed and wavering, a five-haired beard of wisdom trailing from his aching jaw. I stared and stared and victory filled up the little rented boat, from the pool of bilge where oil had spread a rainbow around the rusted engine to the bailer rusted orange, the sun-cracked thwarts, the oarlocks on their strings, the gunnels—until everything  was rainbow, rainbow, rainbow! And I let the fish go.