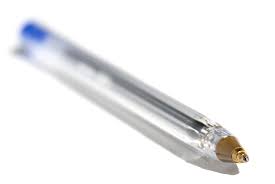 The Way of the Biro

Dependant on my mood ‘The Way of the Biro’ is the title of a poem, a pamphlet, a collection, or any number of failed scribbles. It's definitely the title of one poem, and that poem is blu-tacked to a wall along with thirty-odd other poems. I'll often stare at the poems on the wall, with a pencil in my hand, muttering. I'm trying, with my muttering, to find their rhythms. Every now and again I'll score out a word, make a note, change a line-break. I'm making small changes to these poems. Sometimes I'll pull a poem off the wall and stick it to a different wall. There are another thirty-odd poems on this wall. It's the wall for poems that need A Lot More Work. There isn't a wall for poems that need No Work. I'm not ready for that kind of commitment. I'm adding poems to one or other wall at a rate of two or three a fortnight.

I appear to be making A THING. So, I've started asking myself A QUESTION. What is THE THING? In all honesty, I don't want to know, yet. An answer would be too much like a wall for poems that need No Work. It's a flaw. As soon as I figure A THING out (at least to my mind), I move on to SOMETHING else. As soon as I feel obliged to do THIS THING, I immediately set about THAT THING. As long as I don't know what THE THING is, I'll keep on doing SOMETHING. ANYTHING is better than NOTHING, and to know A THING leaves NOTHING for the imagination. Maybe that's part of THE ANSWER: I'm making A THING, by doing SOMETHING (ANYTHING) to find out what THE THING is.