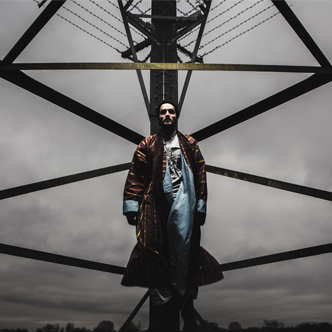 Dizraeli is a rapper, multi-instrumentalist, and singer, known for his music’s spellbinding mixture of hip-hop and folk. He transfixed us with his hour headline slot as part of our So: To Speak Showcase this year. Before the performance, I got the chance to speak with him about being a solo artist, his experience of the spoken word circuit, and the therapeutic qualities of music.

I begin by asking for the reason behind his stage name, but he opts to leave that to my imagination. “It’s just a name,” he tells me, “and I hope it’s becoming the music I’ve made and the words that I’ve written, in the way that words become us as we grow.”

In terms of why he chose a stage name at all, especially when the majority of his music is deeply personal and autobiographical, he explains that it was “just something that was expected” when he was growing up “in Bristol in the nineties, and it was all hip-hop and drum-and-bass, and everyone had a stage name - everyone had a DJ or MC name.”

Dizraeli, or Rowan Sawday, was born in Bristol, and went to University in Brighton. He’s now London based, but his creative path led him to give workshops in Calais, and to study West African music in Senegal.

Going to Calais “affected me deeply in a lot of ways,” he says. While this was necessarily musically, though he “did hear some wonderful music while I was there, I guess it affected the picture I had in my mind of the state of the world, and what 2015/16 was really like for everybody on the planet. I met a lot of people from a lot of countries who were traumatised by conflict and had travelled a long way to be in a shitty field being maltreated by European policemen, and that was very disturbing for me, and moving. I met a lot of wonderful, welcoming, strong, kind people that were those things in spite of every possible obstacle.”

His time in Senegal was inspired, partly by a wish to “rekindle” his childhood love of percussion, also displayed on his first solo album Engurland, but also by the balafon, “a kind of xylophone”. “I’d been given a balafon for my birthday by my dad a couple of years ago. It wasn’t a very good balafon, but I was really enjoying writing some riffs on it. I wanted to know more  about the instrument, so I sought out a balafon teacher in Senegal, and just spent hours and hours every day learning the traditional pieces and rhythms, and practising and playing with my teacher, and with other players as well.”

The teacher, originally from Guinea Conakry, “was an albino musician who was an incredible musician, a little bit younger than me but just such a fucking astonishing musicianship. He was a djembe player and balafon maestro, guitarist and singer as well, and I spent a lot of time over the six weeks hanging out with him and his circle of friends who all played music together, and I learned a lot.”

“Just the feel of being in Senegal moved me a lot. People there treat music just as like air and water, music feels like it’s everywhere, it’s the breath between people.”

In this country, he explains, the relationship to music seems to be “producer and consumer - it’s a commodified relationship to culture we have here. The only people that are allowed to do music are musicians. The standing in the part of Senegal I was in was that everybody’s made of music and dance, and some people have more of a gift for it than others, but everyone has a go. And it’s not at all that everyone can play the drums amazingly, but everyone will have a go at it. Some people will be dreadful at the drums but it doesn’t really matter because it’s just part of the conversation.

His upcoming solo album, The Unmaster, has been two years in the making “from beginning to end, of writing the first song to finishing the last one. It was a very tumultuous couple of years, particularly the first year of it - in fact, the year leading up to the first year of it was particularly tumultuous with my mental health. It was a time when I was asking a lot of questions and finding the world quite a difficult place to be in, and so the album ended up being about that.” Unlike most of his other releases, this upcoming album “is very, very unfolky. I do do some singing in it, and I’ll always love harmony singing, but it’s darker and more influenced by my time in London.”

Over the years, Dizraeli has been part of multiple groups, most recently performing for six years with the Small Gods, but is now performing as a solo act. “There’s a lot of elements of being in The Small Gods that I miss,” he admits. “I miss seeing the people as much as I did then. Working with a band is really joyful in a lot of ways, especially in the process of touring and performing, you get to travel together and have a lot of adventures, and develop a group dynamic, and you become really close. That’s really gorgeous, and it’s lush to share the experience of being on stage with other people.” owever, as a “bit of a control freak”, writing music collaboratively can be “quite hard”.

“I have quite a particular vision for what I want my music to sound like, I find that quite hard to let go of in a group situation,” he explains. “It suits me quite well to be able to play everything myself and write everything myself,” he continues, referencing his first solo album, Engurland, released in 2009. “There’s a certain kind of cohesiveness about the sound if it’s one person playing the stuff, and I guess it’s partly just a control freak thing - I like controlling every angle of what it sounds like and feels like, I enjoy that a lot.

His last EP, Eat My Camera, released in 2016, was recorded live in front of an audience. “I’ve always really enjoyed performing to an audience, and found recording in the studio really difficult,” he explains. “I’ve always struggled with red light syndrome, where you’re just hyperconscious that the process is being recorded and that the recording will last forever. I just wanted to try and get round that, and get back to the essence of the music, and really be present with the songs.

“I decided to record the EP with an audience there, warts and all, not doing any editing and just keeping the performances as they were. And it was a really great, lovely experience.”

“I first got interested in folk because it felt like it had some of the rawness and realness of hip-hop, in the sense that it was people telling their own stories,” he explains. “I guess I was also looking for my own cultural heritage as well. I spent a lot of time studying hip-hop and black music from America, and I was curious as to my own musical heritage - what would my ancestors have been singing and playing? What sort of stories would they be telling? So it’s partly a journey of self-discovery, I guess, too.”

Though hip-hop and folk may seem like disparate genres, Dizraeli says they “just make sense” to him. “Folk just means people. For me, folk is obviously supposed to be music of the people, and hip-hop is very much music of the people.” He also sees the similarities “aesthetically”, both genres being characterised by “a vocal line accompanied by a very simple instrumental or rhythmic part.”

The music he makes also overlaps with the spoken word movement, spoken word being a part of hip-hop, and rap as “a really important form of poetry.”

“The spoken word community, movement, is a wonderful thing. It’s really important, I think it’s rekindled young people’s love for poetry and literature and I’ve got a lot of time for spoken word. I also think it’s a space where people can come and be very truthful and vulnerable, and hip-hop has not so much been that. In my own life, the spoken word scene and the spoken word circuit has been really important for me to have a platform to share the more personal side of what I do. I’m very glad for it, and will continue to go to spoken word nights and collaborate with spoken word artists, and be inspired by what that scene is doing.”

But for Dizraeli himself, “it’s certainly been very therapeutic. In the last couple of years, having a creative practice has helped me understand myself; writing songs has helped me understand myself as well, and make sense of the world around me too, and then also given me a framework to share that self and those struggles with other people. I’m really glad for my music, and I’m really grateful to music and to hip-hop, and to all the ways in which I’ve been able to go down that creative path.”

If you missed Dizraeli’s performance, or want to see him again at a future event, subscribe to him here - He’s also on Twitter, @mcdizraeli.