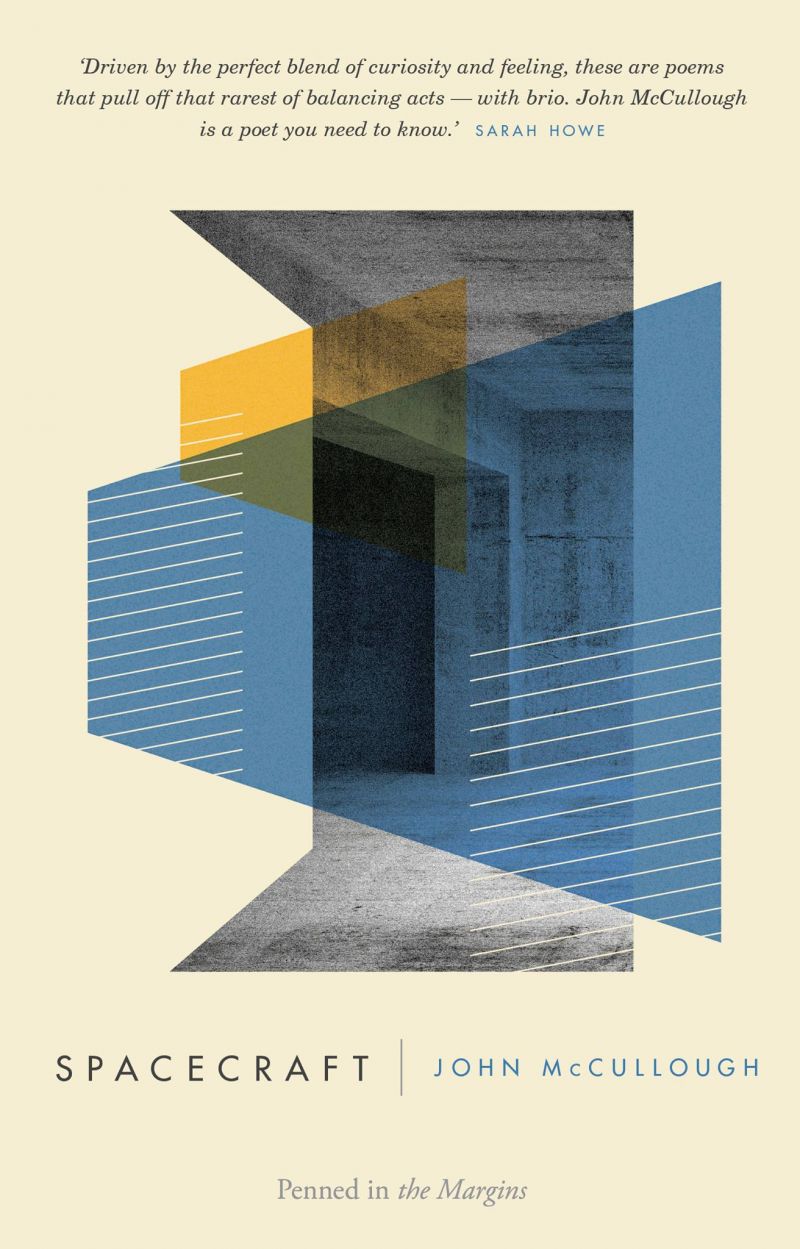 Spacecraft is John McCullough’s second poetry collection, split into four sections – ‘Flying Machines’, ‘Navigating a Space’, ‘The Space Age’, and ‘Living Space’. The second section focuses on the death of McCullough’s partner, Andy Lee, of an AIDs-related illness, but an exploration of death and remembrance pervades all sections. Some poems hold memoriam to other deceased queer figures (Alan Turing, Justin Fashanu), and others to poets - Elizabeth Bishops and Lee Harwood, the latter characterized by “the gaps” in his poetry waiting to be filled by the reader, which McCullough now “listen[s] for […] inside the rain”. In fact, it is a preoccupation with these ‘gaps’ and spaces that characterizes this collection.

The first section, ‘Flying Machines’, begins with a poem dedicated to the exclamation mark. The “feminine indulgence” McCullough finds in the use of the exclamation mark is compared to the act of the “secretary” moving his hand up the speaker’s spine. Yet this “mark of havoc” infiltrates the lives of “bishops, philosophers” and sneaks itself into “vaults, prisons, the bedrooms of kings” – punctuation seems to be a language that cannot be owned by a single community. Elsewhere, towards the end of the collection, the ‘[-]’ is explored, as a woman “flattened”, who “wishes to be remembered as nothing less than that intrepid burst between dates” on her tombstone. Punctuation is both personally owned and universally used, representing lives and lovers, a way of holding space up for interrogation, as McCullough traps it within brackets “(       )”.

These spaces of “absence and emptiness” are explored as “creative forces”, as McCullough explains in our interview with him

Obsolete words embody this space of creative absence, as McCullough rediscovers lost words and gives them new life. For example, the collection’s second poem is named for an Old English word for bat, ‘flittermouse’, which becomes a ghosting lover, remembered with “Samuel Johnson’s dictionary”, from where the word itself comes. The first section ends with an ode to ‘flother’, the 12th century word for snowflake, as the image of a single falling snowflake, asleep “on vellum for centuries/ then bloomed beneath an archivist’s glass”, with a ground “open like a book to catch” it, becomes the word itself.

For McCullough, words cannot only be personified, but people can become words. The second section’s poem, ‘Stirious’, is named after an entry in Johnson’s dictionary, defined as an adjective for objects “resembling icicles”. McCullough uses the extinct word to explore skaters on an ice rink as “letters”, then him and his partner as “language”, one “Anglo-Saxon”, one “derived from Latin”. In both these subsections, language’s power to change is manipulated – the rearranging skaters change “polar to pallor, gilt to guilt”, creating an image of decomposition through the addition of a letter. Meanwhile, the difference between himself and his partner becomes “audible: rise/ascend, go/exit, dead/defunct”, “soon”/”now”, their personalities embodied in differing translations of the same meaning. Then the death of words is explored, “slow as icebergs”, which transforms into a painfully vivid description of the last months of his partner’s life, where his partner’s fingers become “icicles” themselves.

‘Navigating a Space’ is full of transformation; its first poem, ‘Mastadon and Mouse’, sees a mastodon skeleton become an underground train tunnel, their “young mammal bodies” becoming beastly skeletal ghosts “stealing through my house”, concluding with an image of Lee as a skeleton McCullough desperately tries to reassemble, “as if you weren’t more than bone in a puzzle, a word I could change – via hone – back to home”’ In the next, ‘Voyage’, a bouquet of flowers becomes the image of a lost love; a ‘Lava Lamp’ becomes an aquarium of his partner’s “list of stars you’ve tongued” and the awkward silence of a sick bed. In ‘Haul’, his partner becomes an empty house sunk at the bottom of a lake, while in the following poem its door becomes a symbol of heavy grief and relentless memory. McCullough’s clever manipulations of language and imagery are not only vibrantly smart, but carry a deep emotional undercurrent.

These currents run through the whole collection, as certain images develop throughout multiple poems and sections. For example, the image of the spine is a central one; the secretary’s hand moving up his spine is echoed in a later poem by a lover’s “splayed” fingers on the spine of Samuel Johnson’s dictionary, a skeletal horse from ‘Mastadon’ noses the speaker’s spine, and the narrator strokes the “tender spines” of books in a bookshop, where each book stands for a remembered “day”. The image of the spine becomes the backbone of the collection, as words become their definitions and people become the language they are described by.

McCullough can build cities in empty spaces; the bookshop becomes a “small city” as, on a waitress’ tray in The Angelfish Café, he crafts a “city” of “bears and otters dressed as Dorothy”, “Radical Faeries” and a “baby lesbian”. Yet he mourns how a “single sound can hold a city” of sorrow, in its ability to store countless memories of its pronunciation by departed lips.

In Spacecraft, every space becomes grief, yet McCullough’s ingenuity and wide-eyed wordplay forms the foundations of a paradoxically whimsical collection of bold, experimental poetry.