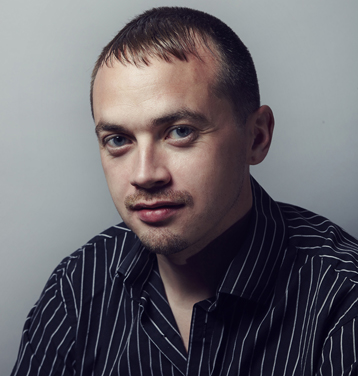 John McCullough is a Brighton-based poet. His work includes two poetry collections, The Frost Fairs, and Spacecraft, as well as commissioned poems for The British Museum and The British Film Institute, and a collaboration with composer Ricky Horscraft and the Actually Gay Men’s Chorus, writing lyrics narrating the story of a queer burglar from birth to death for a piece entitled The Seven Doors of Danny.

McCullough appeared at this year’s So: To Speak 2018 festival, as part of the Small Press Showcase with Penned in the Margins. He published his second collection, Spacecraft, with them in 2016, and I ask him to tell me about how he got involved with the literary arts company. “Spacecraft is quite experimental in its approach to form,” he notes, and explains that this, “together with its surrealism and queer subject matter, meant it would best suit a publisher that liked work that pushed at boundaries.” This drew him towards Penned in the Margins, with their hallmark ‘curiosity, innovation, and openness.’

This bold formal experimentation may have been inspired by his teaching of Creative Writing at New Writing South. His main aim, he explains, is to strengthen students’ “understanding of the effects of different approaches to line and stanza”, resulting in a preference of “techniques and structures” over “wider social debates”. While he admits that “form and content are inextricably linked”, he has found that form is more easily neglected “because most writers aim to make its operation as unobtrusive as possible. A general reader can ignore it, but not a writer who wants to learn how to draw the most from it.”

Another primary focus of the collection is the manipulation of, and experimentation with, language. This includes the use of obsolete words taken from Samuel Johnson’s dictionary, such as the Old English ‘flittermouse’, for bat, or the 12th century word for snowflake, ‘flother’. McCullough says this element originated from “a simple pleasure in the weight and texture of words, their many flavours”, adding that he had always “hoarded collections of obsolete or unusual words” for the “great pleasure” of saying them aloud.

As for why he uses Samuel Johnson’s dictionary specifically, he explains that as well as containing so many of these “vanished words”, Johnson is more “subjective” in his definitions, useful for the collection as it “chimes with the poems’ interest in the side of language that’s bound up with gut feelings, with the body and the unconscious mind”.

The use of these “lost words”, and the act of bringing them “to life again”, is also repeatedly linked to McCullough’s exploration of the loss of his first partner, Andy Lee, to an AIDs related illness, which “spurred the central sequence in the collection”. In fact, it is the “broader theme of absence and emptiness as creative forces” that characterises Spacecraft, also seen in the poems inspired by deceased historical figures; poets Lee Harwood and Elizabeth Bishop, and queer figures Alan Turing and Justin Fashanu.

The studies of these queer figures are aspects of Spacecraft’s exploration of queer lives, a continuation of the investigations of his first collection; The Frost Fairs, published with Salt in 2011, won him the Polari First Book Prize, awarded to a writer whose first book explores the LGBT experience. As well as memorialising queer figures, McCullough’s poetry crafts queer spaces from a waitress’ tray or bookshop shelves.

I asked him how audiences respond to these poems when he performs outside of identified queer spaces. Happily, he has found “poetry folk” to be “an open-minded bunch on the whole”, adding his belief that “people connect with truthful poems wherever they come from”. For example, one of his most surprising “crowd pleasers” is the collection’s opening poem, on “the invention of the exclamation mark, narrated by a medieval scribe who finds it homoerotic”.

“I always try to write with a general reader in mind rather than someone similar to myself”, he adds, though he finds that he also loves “being surprised and encouraged to see the world from an unfamiliar angle, and that's something I hope my poems can do too. I think poetry has a fantastic power to connect humans from all manner of backgrounds in a really intimate way.”

“My kind of poetry aims to move a reader,” he continues. “Like most writers I can’t help but turn out lots of different sorts of poem, though in general I tend to use rhythm and surreal imagery to inspire an emotional response rather than to advance a particular argument.” However, he explains that during the “messy business of writing”, it’s “frequently not what I originally set out for it to do and a lot of the pleasure comes from investigation, from working out what the poem itself wants to be.”

Even once the poem is completed, it is “always a different beast” in performance. The visual elements “can’t have the same impact if someone’s not looking at the words on a page”, for example. “Immediacy is more important in performance, too,” he adds, “because the listener doesn't have the luxury of re-reading a line or glancing again at the beginning once they've reached the end.”

However, performance also enables him “to enrich the phrasing through delivery. I can amplify its energy, add variation and subtexts.” Using this, as well as the order in which he chooses to read the poems out, McCullough aims to create “something new”, a “new performed text” with a “fresh little arc”, each time he performs. “I want to give the audience the best experience possible,” he explains, and so crafts performances that “take the listener from one place to another e.g. from red to blue or from darkness into light, with what I hope are a few entertaining digressions along the way.” You can keep up to date with John's latest news via his website, here, and updates from Penned In The Margins, here.