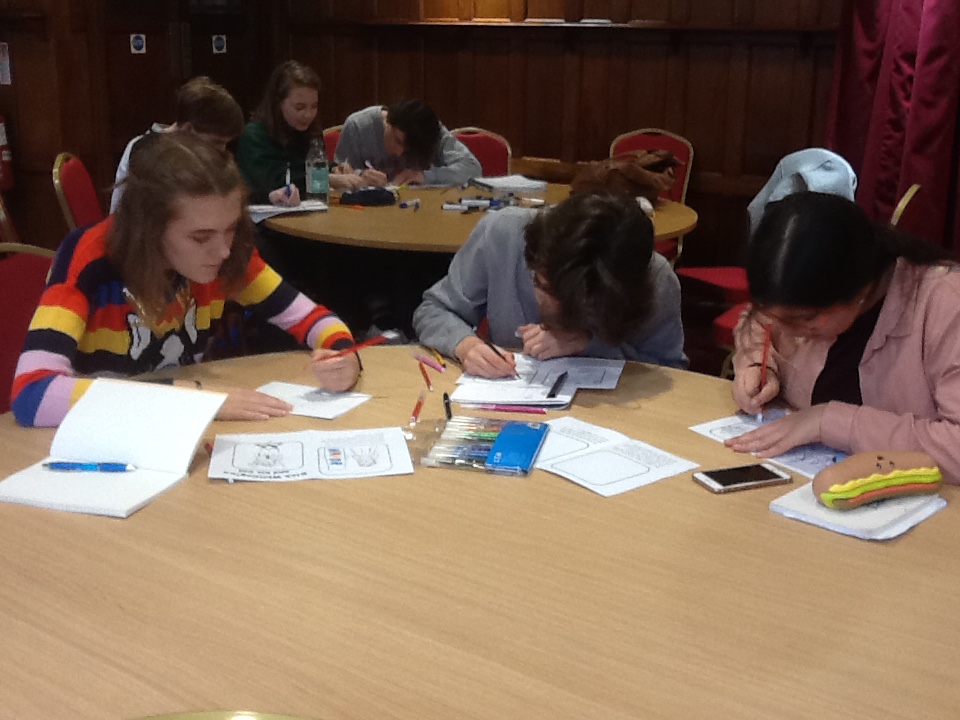 In anticipation of the Young Writers' visit to see the Mayflower's pantomime, Dick Whittington, in January, today's sessions took another look at the classic folk tale.

We began by reminding ourselves of the story of Dick Whittington, and all of its characters, from his cat, Tommy, to the mysterious Fairy Bowbells. In three groups, the Young Writers were then given a storybook, each page highlighting a part of the story, with a blank space for illustration. Each Young Writer filled in a page with their own drawings, then each group stuck their pages together to form three collaborative, illustrated storybook versions of the tale. None of the pages mentioned the main antagonist, King Rat, so each group collaborated to create their own version of the leader of London's Underworld. This included a rat with a cricket bat and talking fez, and a more humanoid version of the villain with green hair, scar, and moustache.

Each person in the group was then given a page from the storybook to expand into a script, each scene following on from the next. These will be developed and performed in next week's session.

This week, we have a guest blog from one of our Young Writers from the 15-18 age group, Hari:

This week at Mayflower Young Writers, we explored the story of Dick Whittington, the Mayflower’s pantomime this year.
To begin, we were briefed on the ‘true story’ of Dick Whittington’s ascension from humble village dweller to Mayor of London, by route of an improbable conflict with a ‘Rat King’ and a voyage to the Moroccan King and Queen.
The group was then subdivided into smaller groups of around four in which we illustrated an abridged version of the Dick Whittington story. Upon feeding back our creations, one group enlightened us to the deep metaphorical meaning behind the Rat King, whilst another group’s illustrations left us dumbfounded with their depiction of a Dick Whittington whose limbs were horribly disproportionate and who was accompanied by a flying whale with ears.
After all the laughing had abated, each individual was then given a section of the Dick Whittington story, which they were tasked to convert into a script for a play. As communication was prohibited during our period of writing, the result was an entirely nonsensical plot in which Tommy the cat could speak in one scene and then not in the other, as well as multiple other continuity errors.
It is needless to say that the session as a whole was immensely fun and the atmosphere of the group was as light-hearted and supportive as ever. I can’t wait for next week!
Hari

We've also had some exciting news about a competition with ArtfulScribe for young writers aged 18 and under:

As part of our ongoing work with Mayflower 400, we’re commissioning three pieces of new writing responding to the Mayflower 400 themes of Light/Fire, Water/Ocean and Journeys/Migration.
18 and under category can submit a piece of fiction or poem, under five minutes. There are three prizes of  £50, £25 and £15 to be won.
Here’s a link to the full info: http://www.artfulscribe.co.uk/news/3/exciting-new-commission-for-southampton-writers
Submissions are welcome electronically through video, audio, or docx/.pdf files. Long-hand submissions can also be sent to ArtfulScribe, Tower House,  Town Quay Road, Southampton SO14 2NY. All entries are to be received no later than Friday 28thDecember 2018.

Good luck to all who take part!