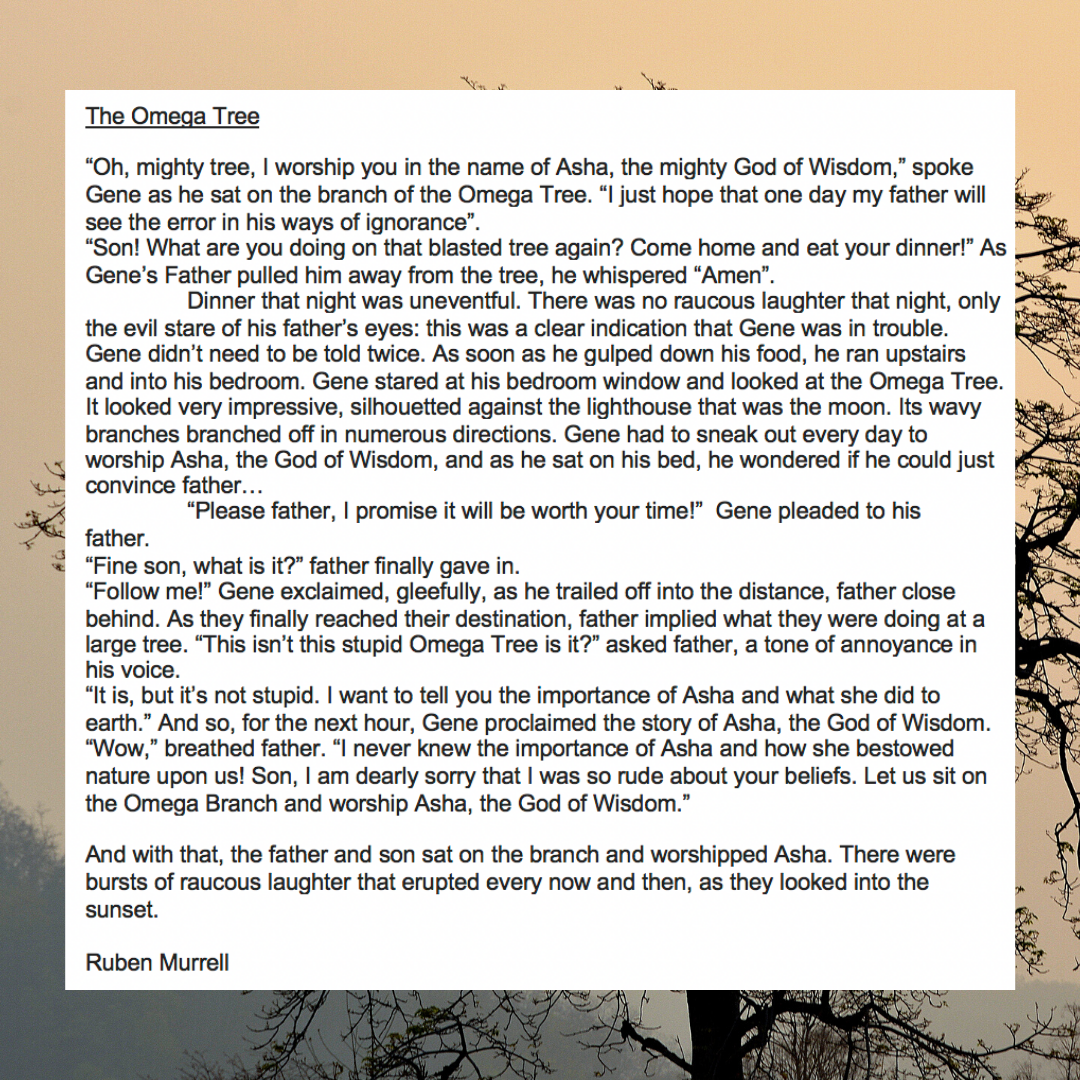 Group one- 16 in attendance

These various writing styles were compared to paintings in a clever analogy that highlighted the depth and interpretation required.

A novel was compared to the painting ‘Romeo and Juliet’ by Francis Sydney Muschamp as it is something deep and detailed, leaving minimal room for interpretation. A short story on the other hand could be understood through Picasso’s artistic technique as you can make out the basic storyline but not all details are explicit. Flash fiction can therefore be compared to modern art as it is completely abstract and requires a lot more work to decipher and understand, it grabs the readers attention and demands interpretation.

Ernest Hemingway an American author presented one of the most famous pieces of flash fiction, a story that was only one sentence in length:

The Young Writers tried their hand at one sentence stories, coming up with the following...

“Warning don’t trust the man in the red overcoat.”

“The intruder left the mansion empty.”

The group then listened to a reading of the winning entry of the BBC 500 word short story competition, ‘The Winning Goal’ by Shachar Applebaum. We evaluated all the elements that made it a prize winning story, understanding how we can make our own pieces as successful and effective.

Did someone lose your object?

Did your object witness something?

Was your object a gift?

Remember your story needs to be simple, one key location and one central image.

Where does your story start?

What will happen in the future?

What does your image symbolise?

What is the backstory?

What do you want the message of the story to be?

Where is your story set ?

How are the characters associated with this image?

Below are some amazing examples of flash fiction created during the session that we had to share!

The rain was drumming down on the roof creating a rhythm, the lightning cracked again and again, the tree was tapping against my window, like our old dog Bongo use to scratch at the door to come in.

I know my tree won’t fall down, but I am worried anyway, Alice is hiding under the bed, she hates the lighting, she calls out “Jayme, how can you look out the window when the lighting nearly strikes the church spire down the road.” I ignore her, she is always asking questions, but she is right, I always watch danger pass by, is it wrong to do so?

The storm whirled all night sending our garden furniture flying down the long winding avenue of our home street. Alice fell asleep under the bed, so I gently lifted her head up off the squeaking floorboards and placed her pink patchwork cushion under it.

The morning was odd a sort of excitement filled the room, I gently nudged Alice awake, she opened her heavy eye lids and slid herself out from under the bed, we stumbled downstairs put on our wellies and macs and trundled outside.

There it was the one and only big tree itself, like a hand reaching from the ground, but something was off, it wasn’t right, we walked under and over the out reaching fingers, until we came to the back of the giant’s hand.

“NO, no, no, why?” I whispered. There at the back of the tree the charred remnants of the biggest strongest branch were strewn on the floor like pieces of confetti, Alice looked up at me as a single tear ran down my face and dropped at my chin to the soft, brown soil beneath our bright red wellie boots.

The children watch their father as he walks out the worn, red-painted door, a khaki green suit and rifle slung over his shoulder. Their eyes, wide and blank, follow him over the horizon of la grande campagne fleurie, his path being intruded upon by swathes of honeysuckle and heather that arrive with the cool spring sun. The hand that pours soup into their bowls is an intruder, is not their father. Does not take them to the river on Sundays and let them tread in the stream. Does not paint for hours in the garden, and let them choose the colour of the sky, nor let them bring pivoines et romarin to work into the landscape. The soup grows cold as they wait to eat with their father, so one thousand miles away, when the green of his suit grows crimson, he will know that there is soup waiting at home, and three children who’ll forget he ever left. He grows hungry in the ghastly hospital ward that night, and gazes upon the sky colouring rose around him. As he shuts his eyes to the setting sun, he thanks his children for making his last sky the most beautiful.

“Oh, mighty tree, I worship you in the name of Asha, the mighty God of Wisdom,” spoke Gene as he sat on the branch of the Omega Tree. “I just hope that one day my father will see the error in his ways of ignorance”.

“Son! What are you doing on that blasted tree again? Come home and eat your dinner!” As Gene’s Father pulled him away from the tree, he whispered “Amen”.

Dinner that night was uneventful. There was no raucous laughter that night, only the evil stare of his father’s eyes: this was a clear indication that Gene was in trouble. Gene didn’t need to be told twice. As soon as he gulped down his food, he ran upstairs and into his bedroom. Gene stared at his bedroom window and looked at the Omega Tree. It looked very impressive, silhouetted against the lighthouse that was the moon. Its wavy branches branched off in numerous directions. Gene had to sneak out every day to worship Asha, the God of Wisdom, and as he sat on his bed, he wondered if he could just convince father…

“Please father, I promise it will be worth your time!”  Gene pleaded to his father.

“Fine son, what is it?” father finally gave in.

“Follow me!” Gene exclaimed, gleefully, as he trailed off into the distance, father close behind. As they finally reached their destination, father implied what they were doing at a large tree. “This isn’t this stupid Omega Tree is it?” asked father, a tone of annoyance in his voice.

“It is, but its not stupid. I want to tell you the importance of Asha and what she did to earth.” And so, for the next hour, Gene proclaimed the story of Asha, the God of Wisdom.

“Wow,” breathed father. “I never knew the importance of Asha and how she bestowed nature upon us! Son, I am dearly sorry that I was so rude about your beliefs. Let us sit on the Omega Branch and worship Asha, the God of Wisdom.”

And with that, the father and son sat on the branch and worshipped Asha. There were bursts of raucous laughter that erupted every now and then, as they looked into the sunset.

“Yeah, Daddy, and just water?” Thomas stares into his glass.

“Now, my loves, let’s not become ungrateful.” Mummy’s tone is like honey, as always.

Daddy’s cheeks are still flushed; have those bones always protruded under them like that? And his eyes: the sun no longer shines there either. I glance at Mummy again. She does not look like anyone other than herself.

“Yes son, it’s definitely me,” he smiles back.

I take a mouthful of soup. Something catches Melissa’s eye. She sticks out a stout little finger.

“Chocolate!” she bumps up and down with excitement. “Daddy brought us chocolate!”

“It’s Mummy’s chocolate, darling,” is the reply. There’s something different about his voice too. Melissa and Thomas have not noticed. They just pout.

Daddy crosses to Mummy again, to whisper something. Thomas catapults a roll at me, and we exchange tongue-raspberries. When I look up again, Mummy’s eyes are crystal and her cheeks are wet.

“Again, my love?” her voice trembles, “I don’t remember the last time you-”

“Don’t worry for me,” Daddy interjects, softly, “We have larger things to take care of – more precious things.” He rests a pale, thin hand on Mummy’s tummy, and kisses her rosy cheek. As he wanders past he ruffles my hair –

“A father couldn’t hope for a better heir,” he grins. He pulls Mummy’s chair out and butters her roll for her, positioning the chocolate in front of her place too. Then, he asks us to close our eyes.

“Thank you heavenly father, for what we are about to receive,” he prays, with more passion than usual.

When I open my eyes, I see his place at the table bare, and catch the tail of his coat as he passes into the bedroom as usual.

“Let your father rest,” Mummy smiles weakly as she reaches for a chocolate.

I glance at Thomas, who glances at Melissa, who’s bottom lip wobbles for a moment. We cannot remember the last time that our Daddy ate with us.

There are some exciting writing opportunities coming up that we would also like to share to keep you all busy during lockdown and the following weeks.

Our ‘Life in lockdown’ competition is open until June 21st, submissions of poems, essays and stories can be sent to artfulscribe@artfulscribe.co.uk.

The opportunity to design a cover for the annual anthology is also now open. The winning entry will grace the front page of the Mayflower Young Writers’ anthology and should be a portrait aspect, not landscape. The illustration will form the basis of the cover subject to any tweaks at the final stage of design and publication. Submissions should be sent to youngwriters@artfulscribe.co.uk.

Full details can be found here-

Ellie Robinson has already had a go at this fun and engaging project, sharing her poignant ‘Haiflu’s’ with us and you!

through the timeless days

But there's a collective voice

That can't be silenced

We may be apart

But somehow we've never been 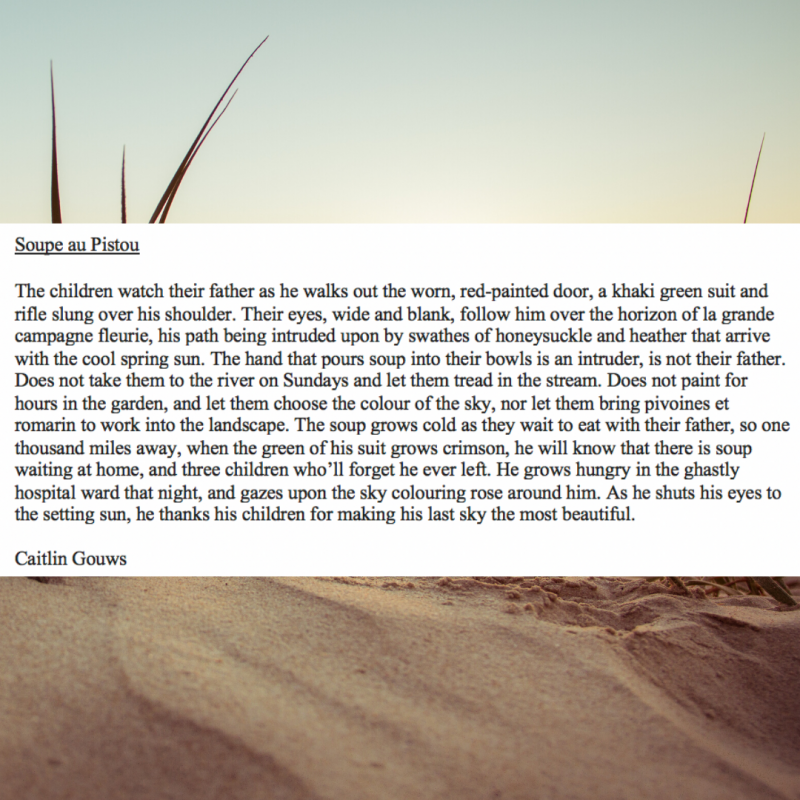 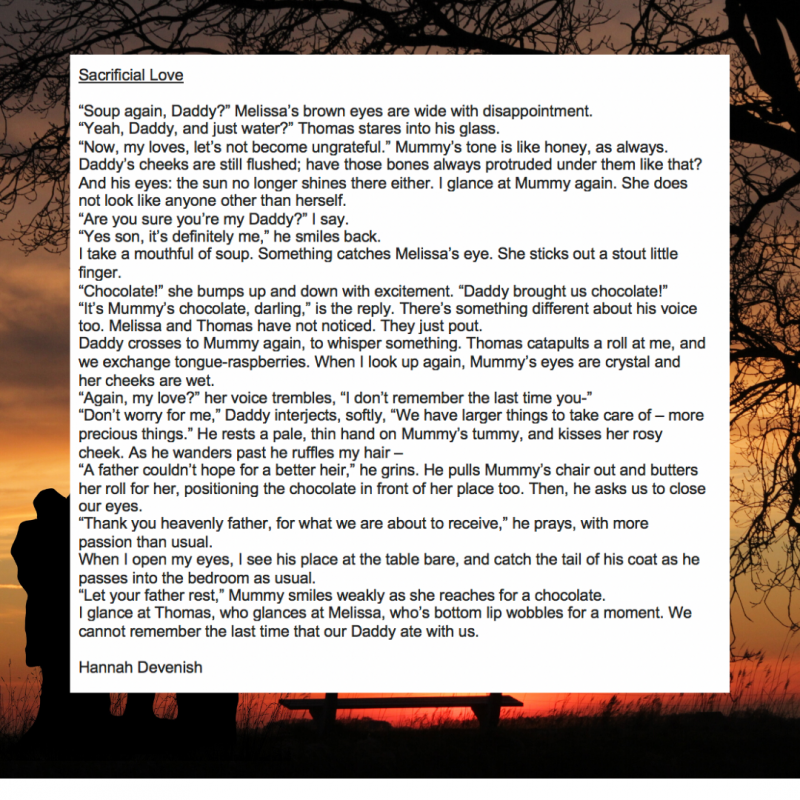 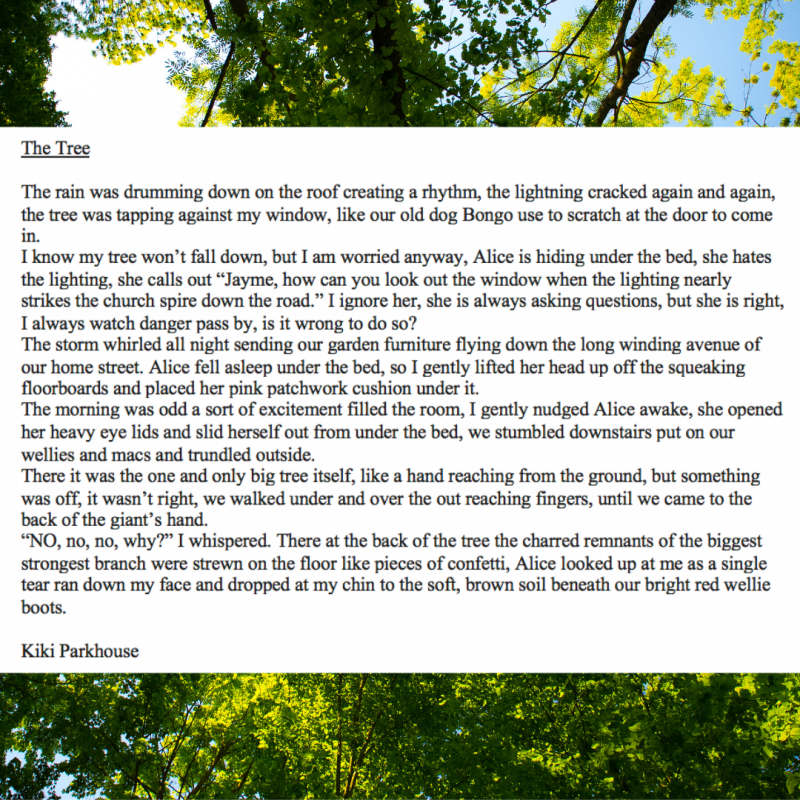 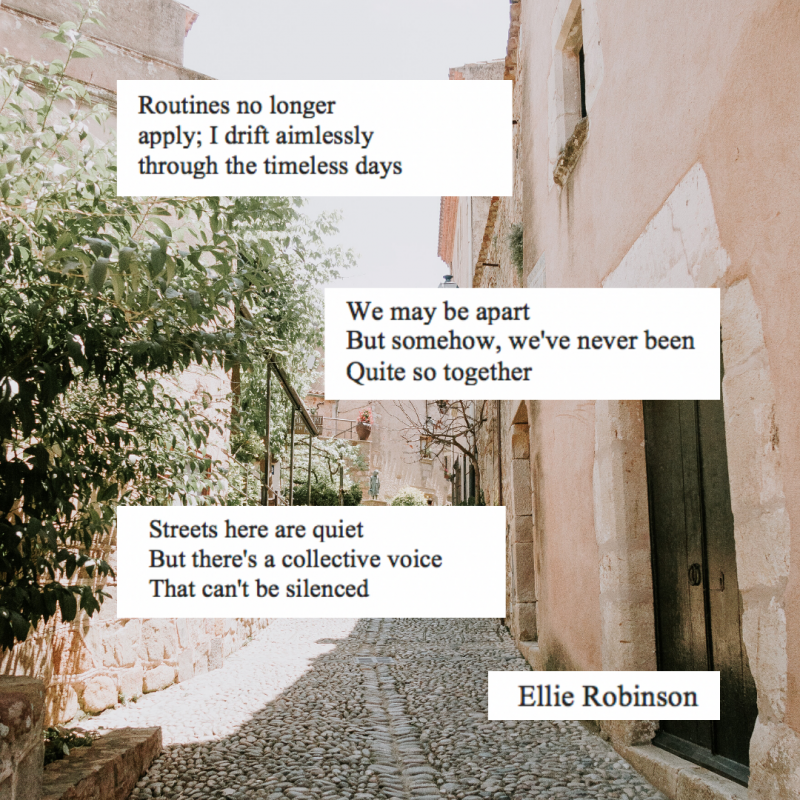