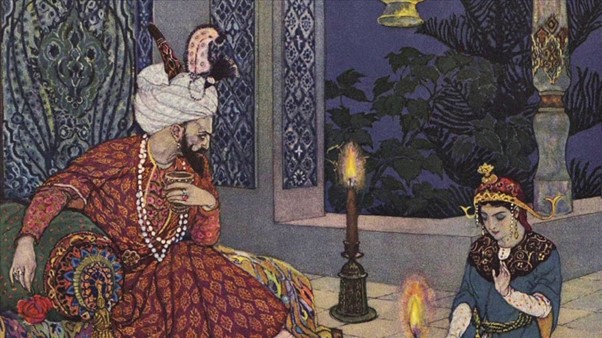 Aaaanndd...we're back for a new term of Saturday workshops!

This term, we're going to be exploring a range of writing forms, styles, skills and techniques, through exercises and challenges inspired by the One Thousand and One Nights tales - a collection of Middle Eastern and Indian folk tales.

After discussing what a cliffhanger is, when and why you might use one in a piece of writing, and any examples we could come up with from books and TV (Sherlock, The Hunger Games, Warrior Cats, Eastenders, etc), we then considered when the first cliffhangers might have been used. Some of the first cliffhangers are believed to come from the One Thousand and One Nights stories.

In the frame narrative for these stories, after discovering his wife has been unfaithful, King Shahryār scorns all women. He marries and kills a new bride every day. Eventually Scheherazade, the Vizier’s daughter, volunteers to marry him and, on their wedding night, starts to tell the King a story, but doesn’t finish. The King postpones her execution so he can hear the end, but Scheherazade starts a new story within that story, and so begins 1001 tales. When she finally ends the king spares her, for he has fallen in love.

We all agreed this is pretty high stakes for a cliffhanger - literally life or death! - and Scheherazade must have come up with some pretty amazing cliffhangers to avoid execution, not just once but one thousand and one times!

Hoping to come up with something as great as this ourselves, I gave each group a cliffhanger. Their task was to write the story up to this point, increasing suspense and tension as they arrived at the cliffhanger. Other than that, it was all up to them!

The younger group's cliffhanger was: “The flames were creeping closer and closer, as she frantically searched in her bag for the one thing that could save her.”

Here are some examples of what some of the young writers came up with...

Blood ran down her wrists, the hot iron chains digging deep into her skin.  Her bag felt heavy on her back, it was soaked in her own sticky hot sweat. If only she could reach it, free her wings from they're hiding place inside. If only she hadn't hid her wings then she may have been able to use their incredible strength to break free. she heard a thudding noise, it was coming from beneath her, beneath the hard rock floor. Then without anymore warning the ground crumbled from beneath her, pieces of its rubble falling down into a fiery furnace of flames underneath it. she was now swinging from only the chains on her wrists. but then one broke, gave way. she had one arm. she could get it out of her bag. The flames were creeping closer and closer, as she frantically searched her bag for the one thing that could save her from an intensely painful death...

Walking into the woods slowly,Layla felt a shiver down her spine.She couldn’t turn back now….she had no choice it was her or her mother.The wind howled and the bushes rustled.Layla could hear the bears growling and the eagles squawking. All of a sudden, a huge light lit up the sky as flames started to appear.The flames were creeping closer and closer,as she frantically searched in her bag for the one thing that could save her...

We took time to share these and many more of the stories from the group, all of which were brilliantly varied and definitely made us what know what would happen next! (Though many of the young writers revealed that they themselves didn't know what would happen next - we agreed that Scheherazade had a particularly tough job not just to leave the cliffhangers but then to have to pick up and continue the story again, in a satisfactory way, the following night!) Each story was applauded and the young writers gave and received some great encouraging and appreciative feedback.

The young writers then had a choice for their next activity - EITHER they could rise to the challenge which Scheherazade had, and continue the story they had begun after the cliffhanger (and even try to end that installment on ANOTHER cliffhanger, if they could!) - OR they could begin a new story, with the prompt of two friends who discover a mysterious object, and choose for themselves where they would like to leave the cliffhanger to make it as suspenseful and engaging as possible.

Here are some of the continued stories from Jasmine and Annie:

‘Hurry Riverflow!’
Tealeafs tail curled in frustration, her wide eyes, stinging with smoke flicked from one burning ash tree to another. Riverflow pulled out a staff and told Tealeaf to hold it for him. Tealeaf pawed the ground anxiously and took it from him.
‘STARDEW, RAIN,STARDEW RAIIIIIIIN’ cried Riverflow and a great bolt of white lightning struck the earth just beside the two terrified wolves.
The rain was so heavy it was like an endless bucket of water was being emptied over the scorched valley. Tealeaf frantically searched for her brother, the light had blinded her.
‘RIVERFLOW!!’ Yelled Tealeaf, she tripped over a log and everything went dark.
Just before Tealeaf gave in to unconsciousness, she saw her brother pelting toward her, staff still in his jaws...

The flames cornered the young girl between two trees.Unable to move Layla began to panic as the flames became bigger and hotter.Soon enough she was forced to accept her fate.Suddenly Layla rejoiced as she found her fire resistant spray.She used it on her clothing and ran through the fire.Not long after she had escaped the forbidden woods and ran back to her village.The Wolves were howling for help as the woods burned to a crisp yet Layla took no notice and just kept running until she got home. But what she found was her mother lying on the floor with a knife in her heart...

All of these stories left us with even more excitement (and nervousness!) for what might come next! We hope to see how these stories continue to develop and build over the next term.

In the older group, we had a slightly different cliffhanger for the first exercise:

She looked around her desperately for a way out of all this. It felt as if the walls were closing in.

Here is Thomas's story so far:

She awoke in a daze, her head spinning like a top before eventually wearing down and falling to the floor. Her hands were slick with sweat, glistening in the blazing heat that stabbed through the walls of her container; a large cuboid that bounced and jostled. Her mind raced with images of a large semi bouncing over a dusty desert road in Mexico, and her heart sank. Now that she could hear again, for her ears were out of commission as much as her thoughts, faint music wafted through the (presumably) front end of the box, jolly with laughter and sickening to the heart of the imprisoned.
After much screaming, and shouting, and wailing, and crying, the music stopped. However, the truck also halted, thrusting her against the searing wall of her prison. Whatever was out there must have died under the razing of the sun. Suddenly, the container was split in half, and a couple of men in wide hats and overalls jumped in with steel-capped boots. This last detail is only noted when her sides were jabbed repeatedly by the fact, bombarding her pain cells with knowledge. A rough voice told her to do something she couldn’t understand, but she could recognise the tone of the command. And she could infer her fate by looking over toward a simple wooden coffin, wobbly in the heat.
With arms under hers she was helpless to escape versus her two brawny kidnappers. And, while she struggled for a while against the brown tomb lid, screws were eventually pushed through in order to break the last sliver of hope she had left. As the box was lifted, and dropped, the heat began to dissipate. At first, this brought respite; safe from the vicious sun. But as it grew colder and colder, she knew that she was being buried alive. Up above, the men smiled as they made out her fear in the dust, enjoying every second of listening to her distress. Their eyes wandered over the plains, marked with trees over every body. She looked around desperately for a way out of this. It felt as if the walls were closing in.

Like the younger group, we then shared our stories so far, offering positive and encouraging feedback (and sharing the questions we had about what would happen next!) Again, the young writers then had the choice either to continue the story they had started or to begin a new one, aiming to leave it on another cliffhanger, at the perfect moment! It was great to hear how some of the stories developed further, establishing a stronger sense of the author's voice and style, and giving us more details as to who these characters are and where they are.

Over the course of this term, we will be returning to and building on these initial ideas for stories, looking at how to sustain a longer piece of writing and keep your reader or audience on the edge of their seat (inspired by the One Thousand and One Nights!)
Next week, we will be exploring poetry, inspired by Scheherazade as a character and the frame narrative of the One Thousand and One Nights. See you then!
PreviousNext