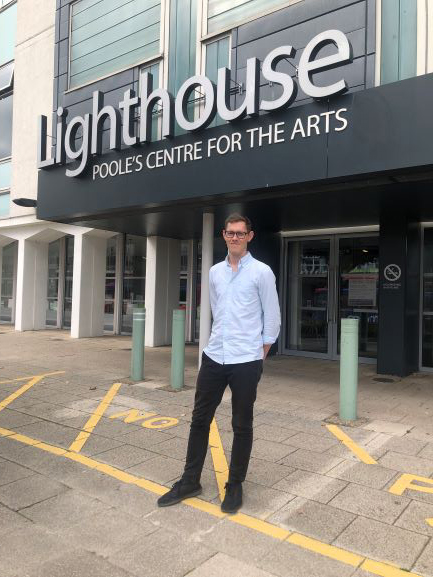 I write this on the day that Lighthouse has received a grant of £987,964 from the Culture Recovery Fund, which will secure its future until the end of the financial year. This comes with a huge collective sense of relief, as I know the last seven months have been incredibly difficult for all those who work at and rely on Lighthouse both financially and culturally.

For my own part, I’m comforted that the end of this residency should coincide with this good news. When I started out as writer in residence last Autumn the current situation was unimaginable. I’m grateful that between September and March I was able to experience Lighthouse as it should be experienced – as a vibrant and bustling cultural centre for its region. I had some fantastic ‘live’ experiences, the highlights of which include witnessing the Bournemouth Symphony Orchestra rehearse a performance of Aaron Copeland, having backstage access at the panto, and shadowing a production designer over the course of a ‘get in’. I met some fantastic staff and performers and have made lasting connections.

It’s lucky that much of my outreach work took place during this period as well. I visited a range of local schools to do talks and workshops and spoke to hundreds of students. I met some truly gifted young writers and I continue to be inspired by the work they produced. Since March, I’ve been a ‘writer in absence’, but I’ve continued to engage with Lighthouse virtually as much as possible. I was invited to work with Lighthouse’s own young writers group for an online workshop and I’ve been involved with the art centre’s bedtime story competition.

One of the small consolations of lockdown was that it gave me the time and space to write and I’ve been busy producing two separate works. In a sequence of poems called ‘The Osprey’ I chart the progress of a very special visitor to Poole Harbour, an osprey named CJ7. The ospreys of Poole Harbour first came to my attention during a collaboration with Light Up Poole, for which I visited the offices of Birds of Poole Harbour to learn about their Osprey Translocation Project. During lockdown, BOPH provided a live stream one of their artificial nests in which CJ7 settled over the spring and summer months. The poems tell the story of CJ7’s stay in the harbour through the use of theatrical and orchestral forms and devices. My aim was to locate the arts centre in the surrounding natural environment, but I also wanted to bring the flora and fauna of the harbour into the auditoria of Lighthouse’s performance spaces and to listen to the echoes.

The majority of my time has been spent writing a debut ninety-minute stage play, inspired in part by my time spent in the Townsend Theatre at Lighthouse. The play is semi-autobiographical and tells the story of an isolated farming family during lambing season. Writing it took me by surprise and I’m incredibly grateful to Lighthouse for giving me the opportunity to experiment in a form that’s new to me.

I’m in discussions with Lighthouse and ArtfulScribe about how to bring these works to audiences at the arts centre and beyond, so listen out for announcements. The only thing left for me to do is to thank ArtfulScribe and all those who work at Lighthouse for this incredible opportunity. Times are dark but places such as Lighthouse are a shining light.