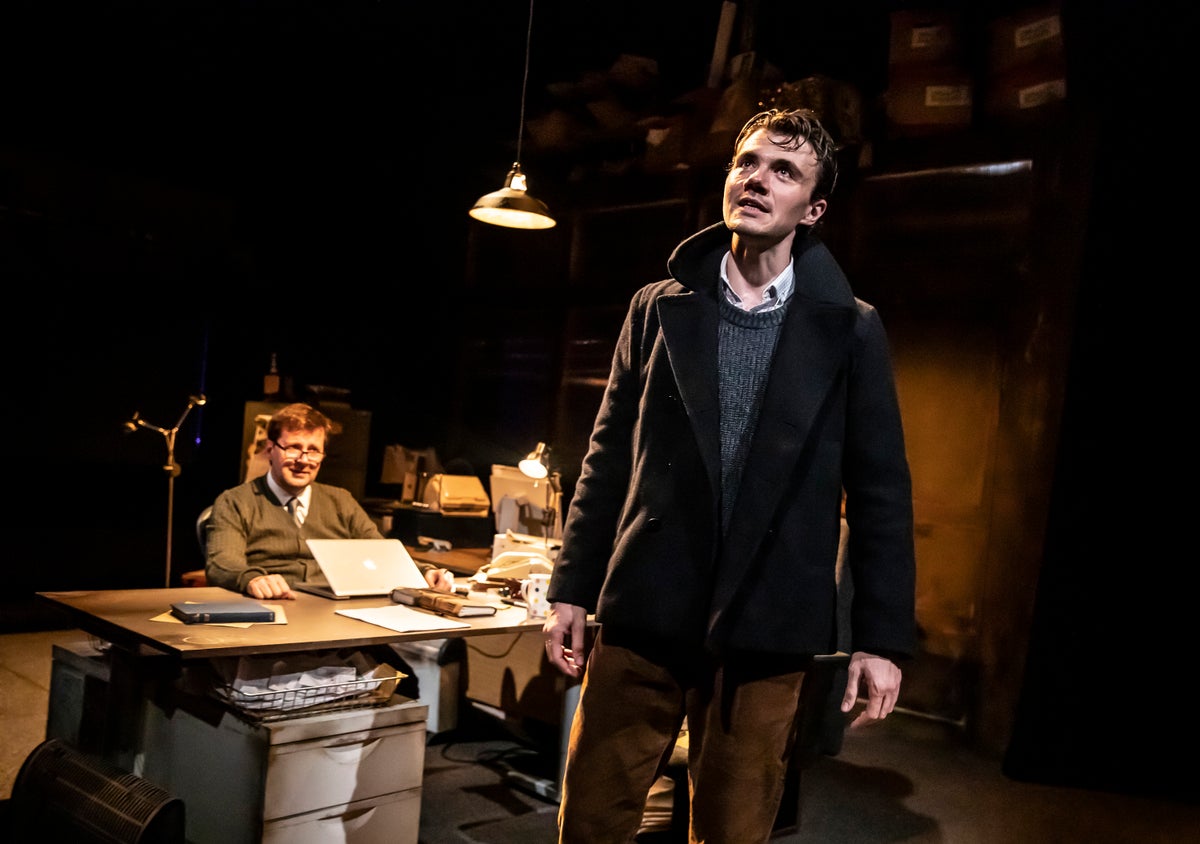 Recently, I got the chance as Young Writer-in-Residence at MAST to see a play here.

When Darkness Falls is set on a dark and stormy night, on the island of Guernsey, in a messy office belonging to John, who is waiting on a ghost expert – The Speaker – to interview for his historical-society ‘vlog’. John is a bit befuddled by the concept of a ‘vlog’ and it felt that way in the larger context of the play too – who exactly the audience of the vlog is, or what the eventual arrival of a man monologuing five floridly told ghost stories offers them, I wasn’t sure. That is, however, the play.

I felt unmoved seeing When Darkness Falls; Nick Curtis decently articulated part of the cause for The Evening Standard:

“As Alex Phelps’s cartoonishly sinister writer reveals the grisly details, Will Barton’s blokey, no-nonsense John starts to join in, sometimes supplying extra narrative, sometimes acting out the parts. Sudden blackouts, bumps in the night, and startling manifestations scare him – and us – to bits, but after each, both men act as if nothing has happened. The acting is uneven, but neither Phelps nor Barton is given a proper character or a linear way through the plot.”

The word I’ll use to criticise the play is its discord (as in discordance, or dissonance). Notice how John, a ‘blokey, no-nonsense’ character, is observed to simply ‘join in’ and accept The Speaker, despite his presentation as ‘cartoonishly sinister’. Why doesn’t the close-minded sceptical John have questions or more of a reaction to these theatrics? It’s hard to blame something was lost in translation when one of the writers also directed the play; this suggests to me discord is rooted in the text.

In this entry to my residency blog, I’m making a short creative interrogation into When Darkness Falls, imagining ways of addressing this discord to best bring out the merits of the existing material.

The point I will focus on is the artifice of the ‘vlog’ which John says he is recording. By using this set-up, the playwrights have introduced a third character into the play – the audience of the vlog – but fail to ever realistically address them or have the characters self-consciously react to them. John, after being haunted out of his wits, for example, would surely feel embarrassed or startled – want to stop the vlog, or make excuses for himself at least. I’ve invented some dialogue for this purpose, here:

John has just recovered from a fit of horror. He looks over to The Speaker, who is solemn.

Look, I’m- I’m so sorry, I don’t know what came over me, I must’ve… I’m afraid I’m not sure I feel comfortable carrying on.

The Speaker. I did warn you.

John makes to stop recording the vlog on the laptop; waits-

And, actually no, it’s bigger than that. I think we have to end it here. I trust you’ll get home fine? Again, I’m sorry to do this. I realise it’s unprofessional; I made a promise but…

I mean, what happened? I- I’ve never felt…

The Speaker. Have me stay. There’s more to hear yet.

John. And you can promise an explanation?

The Speaker. There’s more to hear yet.

Without actually infringing on the direction the play goes in, this sort of moment touches base to convince us of the characters by having them react to events, rather than ‘act as if nothing has happened’, like Nick Curtis points out. Notice how The Speaker can still be eerie and hold back all information, but the tension is addressed, and I think this helps suspend our disbelief.

Taking a further liberty to reimagine the play in this way, I wonder if we can’t shut down the vlog, and earlier. At the moment, it acts as a framework introducing us to John at the beginning – a reason for him to talk aloud when no-one else is there with him – and an excuse for communications between these two contrasting characters to take place, but then it becomes arbitrary and, in fact, a distraction. Solid efforts have gone into inventing an isolated setting – on a dark and stormy night in Guernsey, John is haunted by a visitor, helpless, with no-one there to believe him – but the ‘vlog’ opens all that back up, gives us a sense that the internet is watching, and is in any case providing recorded proof of what happened. Lay on top of that the fact neither character pays attention to it once they get going… Why keep the vlog? Here’s a version where the vlog is killed towards the beginning, but the play carries on:

The Speaker is mid-way through his first chilling ghost story. The lights flicker and there’s a ‘pop’!

John makes his way to the laptop, fusses about with it.

The damn thing’s gone and died. I don’t believe this. Hold on, I have a charger…

The Speaker. The old woman, she kept hobbling down the path… John, are you listening?

John roots around the filing cabinet.

John has found the charger – he is connecting it to the laptop.

The Speaker. And at the end of the path, do you know what it was the old woman discovered?

John. (still fiddling) I can’t imagine. The vlog’s stopped recording; you’ll have to bare with.

The Speaker. The child. Or rather, the child’s bones.

John. Right… That is good. Just, do you mind saying it again in a moment once it’s booted up…?

The Speaker. It was as though he’d been dead some forty years.

John is fraught, grabs a notepad next to the laptop, tries a pen – out of ink – then finds one that works and starts transcribing the story.

John. I’ll get it down the old-fashioned way.

The Speaker brings his story to a grand crescendo in dialogue, John transcribing it the whole way through. It ends like this:

The Speaker. …in a vortex of bloody death that would last an eternity.

The words hang in the air, as John finishes writing, looks at what he’s written, then looks up, as if affected.

John. I’m sorry about the laptop – I’m not even sure what’s gone wrong. It doesn’t seem to be…

John’s preoccupation here with the vlog is a barrier to him immersing in the ghost stories, as it is – in my opinion – for the audience. By killing it, the connection with the outside world is lost and we really are stuck on this island, unprotected and alone on a dark and stormy night. As the play goes on and more and more goes wrong, the security John feels, and with it his scepticism, can melt away, where currently in the play, without even having lost the vlog, John exhibits a shaky compliance with The Speaker which feels jarringly uncharacteristic – it needs to be earnt. To do that, I’d take John on a character arc, gradually piquing his interest, until he’s so involved with the ghost stories that he forgets to keep transcribing them. Eventually, he’ll realise how trapped he is and be haunted in full effect, when darkness falls…